In the fourth article in her series on unusual forms of diplomacy, Samantha Adler examines efforts to use sports to bridge the divide in Northern Ireland. 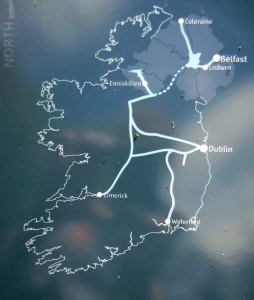 The 30-year conflict in Northern Ireland known as “The Troubles” lasted from 1968 until 1998. The conflict focused on the constitutional status of Ireland. The Protestant majority wanted to remain under the umbrella of the United Kingdom while the goal of the Catholic minority was to become part of the Republic of Ireland. Although there was underlying religious conflict, the BBC reports that territorial and nationalist sentiments played a strong role.

Clashes between loyalist paramilitaries, the British military, the Northern Ireland police and Republican paramilitaries such as the Provisional Irish Republican Army left more than 3,500 people dead and more than 50,000 maimed, according to the BBC.  The conflict did not formally end until the signing of the Good Friday Agreement in 1998, which was an enormous diplomatic effort in which the United States played a major role.  This traditional diplomacy left many issues unresolved and trust among communities shattered.

An “unusual” conflict resolution program that developed to help ease these tensions is the Peace Players of Northern Ireland. PPI is an independent organization that uses sports, primarily basketball, to unite children from Protestant and Catholic communities under the umbrella of sports and teamwork, in order to ease residual tensions from the time of The Troubles, according to Gareth Harper, managing director of the Northern Ireland Peace Players program. Although tailored to each community and each program, the organization has three core elements that it follows as well as a general curriculum it uses.

The first core element is “frequent, long term integration.” This element is based on the ideas of establishing trust, pursuing shared goals, and relationship building over a long period of time, according to the website for the Peace Players of Northern Ireland. This element begins with children first working within their own identity groups, only with Catholics or only with Protestants. The focus is on establishing trust with their teammates and coaches and beginning to understand the overall curriculum. Finally, “twinning” occurs which is the first time these groups interact with their peers from the “opposing” group,” PPI explains. Using basketball and facilitation skills, these players learn respect and understanding of the “other side.”  After this initial meeting, “twinning” becomes far more frequent, occurring not just throughout the yearlong program but throughout the following few years. PPI says the idea is to develop comfort with the process and with each other that lasts for a lifetime.

The second core element of this program is local leadership development.  Once children ages 6 to 14 have graduated from the first core program, they are invited to participate in this second level core program during which they learn to lead the programs designed for the younger children. They can become assistant coaches, perform community service and participate in intensive retreats to learn how to improve the programs and apply their learning to bring real change in their communities, PPI says. This core program encourages strong bonds between the teenagers and the coaches to ensure a network for future efforts to catalyze change.

The final core element of the Peace Players program is called the peace and leadership curriculum. This is the education component of the program and is designed to counter the idea that the children who participate in the program are good people, but the rest of the people from the “other side” are not. PPI says that this curriculum targets local needs and shows how to integrate this education into communities in order to spread the understanding that program participants have gained.

The general basketball-based curriculum is anchored in the concepts of formal peace and leadership education. The organization partners with the Laureus Sport for Good Foundation and the Arbinger Institute, which studies interpersonal conflict globally and funds children’s community sport projects, according to the website for the Peace Players of Northern Ireland. The Peace Players curriculum uses fun and organized sports in order to guide participants to think differently about the conflict and their role in it. PPI says it places responsibility for change on each participant and encourages them to think “out of the box” to change the mindsets that have been ingrained in them.

One of the most important examples of drills that PPI uses is a “passing of the ball” drill.  Coaches secretly instruct participants not pass to one of their teammates throughout the entire drill, although that teammate does not know this. If at any point the excluded player does gain possession of the ball, he or she will then not pass it along to their teammates and will hold onto it selfishly. The entire team gets hurt in this process.  Once the drill is over, a discussion takes place about the behaviors and how all participants acted in the given situation. PPI uses the drill to mimic the conditions of the conflict but in a sports setting and the young participants begin to develop their own language to describe their lives beyond the court.