Views and photos from Rachel Leah 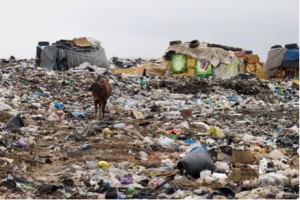 With no trashcans or recycling bins provided, the city is drowning in a morass of discarded plastic, the main culprit in the massive flooding in 2015 that submerged entire neighborhoods in the capital. That flooding led to the deaths of more than 200 people, most of them burned to death during a filling station explosion while seeking shelter from the torrential rain.

Open roadside gutters are meant to stem the heavy rain and flooding expected during the rainy season, by sending the water out of the city and into a lagoon that empties into the Gulf of Guinea. But heaps of castoff plastic and trash dam up the gutters and lagoon, inhibiting the flow. Trashy Bags, an organization that turns discarded plastic into handbags, estimates the total waste generated from plastic at an average of 22,000 tons each year. That figure has risen by 70 percent in the past decade alone. However, the government has failed to rebuild the 40-year-old gutters and has no policy that curbs the mounds of plastic waste littering communities.

Blocked gutters cause  myriad problems for the people in Ghana. Besides the increased flooding that has proven deadly, the gutters are ideal breeding sites for mosquitoes that bring malarial infections. Also, a lethal spate of cholera outbreaks over the past few years have been attributed to the combination of heavy rain and uncollected waste. No population remains more at risk than the inhabitants of Ghana’s poorest communities and slums.

President H.E. John Mahama threatened to ban plastic in 2015, a measure that Rwanda, Tanzania and Uganda have already implemented. But Ghana has not adopted the restriction, nor has it stopped manufacturing and distributing the product throughout the country.

Quaranchie Adama-Tettey, manager of Accra Plastic Waste Management Program, wrote in News Ghana that there have been recommendations since the 1980s for how the government should deal with plastic waste. But, as Isaac Monney, an environmental engineer wrote in Modern Ghana, “they just remain on paper.”

To date, Ghana’s most promising plan was a compost and recycling plant that was shut down in 2014 “due to unfulfilled financial commitments by the government.” The compost plant was the product of two documents: Ghana’s revised Environmental Sanitation Policy and the accompanying National Environmental Sanitation Strategy and Action Plan. The reports outlined national strategy that engaged policy makers, private sectors and individuals to reduce waste, refine waste disposal and cut in half the number of people living without access to running water and basic sanitation by 2015; close to 76 percent of Ghanaian households were believed to be without such services.

There was action on one of the proposals in the document: the creation of sanitation courts designed to deal specifically with sewage and waste cases. The 11 courts established in Accra six years ago (the rest of the country forsaken) have accomplished little, and with no concrete policy change surrounding the plastic waste, the flooding is only getting worse.

Other initiatives have collapsed when government funding dries up. For instance, the Ministry of Local Government and Rural Development helped sponsor and organize the National Environmental Conference, an arena to showcase and discuss research, strategy and technology that targets issues related to sanitation. But after the second conference, there was no third. Yepoka Yeebo, a reporter based in West Africa wrote in qz, “the simplest explanation, however, is that sanitation has never been a priority for leaders in Ghana.”

Articles in the Ghanaian press have gone so far as to urge that the responsibility for keeping the streets and gutters clear should rest with local communities, making residents more accountable for littering and understanding its sometimes dire consequences. Such charges absolve the government and place the blame on the most vulnerable and destitute communities in Ghana. As Monney writes, it is common knowledge that “high income areas are characterised by clean environments while nauseating stench from heaps of waste and choked drains characterise low income ones.”

The plastic waste piled up in gutters, canals and communities is as high as ever and the government’s inaction is literally costing Ghanaians their lives. This past June, just days after the anniversary of the deadly 2015 fuel fire, flooding swamped southern Ghana again, this time claiming at least 10 lives, including a young child who was swept away.

President Mahama and supporting Environmental and Rural ministries need to re-evaluate the proposal to ban plastic bags, by first, encouraging a point-of-sale fee. Such a fee would spur the return to traditional cloth, woven or grass baskets and bags that were commonplace before plastic. This is a method South Africa and Botswana have already enforced. Public trash cans need to be placed strategically and collected with regularity. Only after the government implements these measures should it levy fines on individuals.

Most crucially, if the government is serious about solving the plastic waste problem in Ghana, as Adama-Tettey writes, “it must as a matter of urgency.”