In the midst of Burundi’s civil war, two Zulu leaders who had once tried to kill one another shared their experience of making peace. Samantha Adler examines their work and other efforts in the third of five articles on innovative diplomacy. 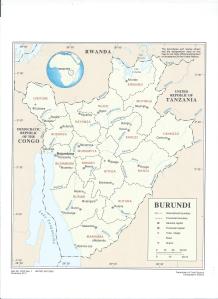 Map of Burundi, courtesy of the United Nations

Burundi, in central Africa, gained independence from Belgium in 1962 in a move that separated it from neighboring Rwanda.  Just as in Rwanda, Burundi faced the problem of ethnic tensions between a Tutsi minority and a Hutu majority.  After many years of hostile elections and rebellions, a civil war that killed more than 300,000 people and drove more than a million from their homes broke out in 1993, according to African Union Ambassador Adonia Ayebare.

South Africans first got involved in Burundi’s conflict in 1995. Two South African Zulus, Meschack Hadebe and Sipho Mlaba, who had participated in the intense conflicts during the final years of apartheid, visited Burundi, as Barbara Borst reported for The Associated Press. One had led African National Congress supporters and the other led Inkatha Freedom Party supporters – two groups that had battled each other for dominance among Zulus, South Africa’s largest tribe. The two told their Burundian hosts that they had spent the entire conflict trying to figure out how to kill each other in their town of Mpumalanga.  When the town began peace talks, well before the rest of the country, in 1989, these two men began to work together and became the closest of friends, Borst reported. The rest of South Africa did not catch up with a transition to full democracy until April 1994. Yet, years before that, these two leaders had won African peace awards for resolving conflict in their town and showing that the worst enemies can learn to trust each other for the good of their people and for the sake of reducing violence and establishing grassroots movements.

The South African government’s official mediation in Burundi, the Arusha peace talks, began in 1995 and continued until 2001 when a power-sharing government was established in Burundi, ending most of the fighting and disarming thousands of soldiers and rebels, according to Ayebare. South Africa was essential to these Arusha peace talks, acting as mediator for the two sides.  These mediations were not only run completely by another country and many of its leaders, but also included so many organizations and elements that, when they all combined, it became a very unusual process.

South Africans and Burundians were assisted by International Alert, a London-based organization that tried to aid in the peace process. Julius Nyerere, former president of Tanzania, began the peace talks but when Nyerere died in 1999, Nelson Mandela took over the mediation as the retired president of South Africa , according to Junhyuk Park, a doctoral student at Purdue University. Nyerere’s strategies failed when he was unable to bring the Hutu parties to the table; they resented a regional army blockade he had implemented and doubted his ability to be unbiased, according to Park.  Mandela had more mediation experience and power and was able to convince the warring parties that, based on his experience with power-sharing in post-apartheid South Africa, Burundians had the ability to fix their own country.

Mandela was able to convince Hutus and Tutsis to unite their armies, which was a major step in the mediation process.  Mandela included many international heads of states from all over the globe in the peace process in order to give more credibility and legitimacy to the process, according to Park. They agreed on and set up a transitional, interim government. Park says that Mandela took a rather manipulative, public and direct hand in the mediation process but was also able to use his reputation to get all the parties to the table. Although Mandela was more effective than his predecessor, Nyerere, many claim that Burundi never achieved a “complete” peace because rebel groups never fully committed to the process and the United Nation’s peacekeeping mission in Burundi was weak, Park says.

In 2002, South African Deputy President Jacob Zuma took over from Mandela and began a more discrete form of mediation in which he tried to obtain another cease fire between persistent rebel groups and the transitional government, Ayebare says. Zuma also developed a “technical committee of intelligence officials from Uganda, Tanzania and South Africa to provide him with strategic information” to aid in his mediation process,” according to Ayebare. Over many years, the United Nations became involved and mediations continued until a regional initiative was formed. Comprised of representatives from South Africa, the UN, the African Union, the European Union, and the U.S., it was called the Partnership for Peace in Burundi and it encouraged Burundi’s continuous progress toward complete peace, according to Ayebare.

During this mediation, many other organizations or entities visited Burundi and participated in the conflict resolution process. One of these was the South African-based African Center for Constructive Resolution of Disputes, according to Borst. Another was the United Nations, which was involved in peacekeeping and in the organization of the Peace Advocate Committee, Ayebare says. The committee, formed by special representative Amhadou Abdullah, had been an essential part of spreading the story of the two Zulu leaders back in 1995, Borst reports. The committee consisted of 26 members from many different areas of Burundi; the members included civil servants, government officials, and military officials, according to Borst.  The peace committee wanted to demonstrate that “when people want to, they can get together and resolve problems without bloodshed,” Borst reports. These groups also brought people who had helped to write the new South African constitution into Burundi to advise a commission on how to construct a new government.

Additionally, the International Committee of the Red Cross had a role to play in the process of conflict resolution. According to author Mary Anderson:

“In Burundi, rather than import the words of the already formulated international humanitarian principles to which it is committed, the International Committee of the Red Cross brought together a group of Burundians, representing different groups and strata of society, to consider where in their own culture they could identify the aphorisms and cultural values that conveyed humanitarian principles.  Over some months the group collected and organized sayings and myths shared across Burundi society and took them ‘on the road’ in plays and performances.”