The actress and activist Geena Davis denounced “stereotyped, hypersexualized” images of females in the entertainment media at a recent symposium in New York. Lori Perkovich reports. 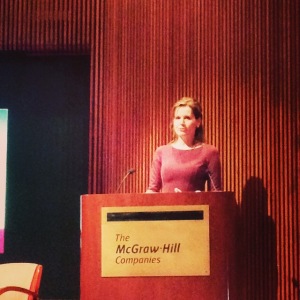 Geena Davis, speaking at the United Nations, called for films and TV shows that show females as equals. Photo by Lori Perkovich

“What message are we sending to boys and girls when female parts are stereotyped, hypersexualized, sidelined, one-dimensional, or simply not there at all?” Davis asked in a passionate opening statement at the second Global Symposium on Gender in Media. “We are saying to them that women and girls are less valuable than men and boys.”

As an actress, Davis, the founder and chair of The Institute on Gender in Media, is in a unique position to raise awareness about the lack of substantial roles for women in film. She briefly discussed her institute’s study, which revealed that women make up 17 percent of individuals in crowd scenes in movies, the same percentage as in 1946. At that rate, said Davis, “women will achieve parity in 700 years.”

After having a daughter, Davis began watching children’s programs and noted a lack of female characters. She then examined other genres of film through a gender lens. She found there were few women in any aspect of the media, on and off screen. When she talked to movie executives about the lack of substantial roles for women, she said they would often “name a movie with one female character in it as proof that gender inequality had been fixed.” The executives would proudly declare, “We have daughters; we’re committed to this.”

After hearing that statement one too many times, Davis realized that her argument was not being taken seriously because men in the industry could not see the situation from her perspective. She decided to prove her point through quantitative data — executives would understand numbers. That is when Davis commissioned the largest study of women in media for the past 20 years. She discovered that only 10 percent of all films have a gender-balanced cast.

For the symposium’s first panel — Global Storytelling: Portrayals of Women and Girls — Nanette Braun, chief of communications and advocacy at UN Women, served as moderator. Panelists included Angie Wang, executive director of Peace is Loud, and Elizabeth Frank, chief of the content and programming office at AMC Theatres, among others. The panelists discussed the difficulties of acquiring financing for female-led casts but noted that the larger issue is funding for distribution of these films. Often the project needs a bankable male actor in order to secure financing. Frank said that for films with mostly female casts, if there was a man in the cast, he would be prominently featured in all advertising.

The second panel focused on Media Impact on Global Issues Concerning Women and Girls. Sundaa Bridgett-Jones, associate director of the Rockefeller Foundation, moderated and panelists included Gary Barker, founder and international director at Promundo; Doreen Bogdan-Martin, chief of strategic planning at the International Telecommunication Union, and Angela Guy, senior vice president for diversity and inclusion at L’Oreal cosmetics. This panel emphasized programs that focus on engaging girls at a young age and showing them through practical application that they have the skills to work in science, math, technology and other professional fields.

Phumzile Mlambo-Ngcuka, UN Under-Secretary General and UN Women executive director, spoke about domestic violence, sexual violence, child marriage and other disheartening statistics. She was in New York for the 69th Session of the UN General Assembly and was promoting the Beijing Platform for Action Turns 20 project to bring awareness to gender issues that plague the globe.

Stacy L. Smith, associate professor at USC Annenberg School for Communication & Journalism, conducted the study Gender Bias Without Borders: An Investigation of Female Characters in Popular Films Across 11 Countries. Commissioned by the Institute on Gender in Media, the study analyzed 120 family-friendly films produced between 2010 and 2013.

During her presentation, Smith said the research showed that, out of 5,799 speaking/named characters, just 31 percent were female and 69 percent were male. In all 11 countries, female characters as young as 13 were twice as likely as boys to be shown in sexually revealing attire or partially naked. The ratio of women filmmakers is 21 percent, with female directors at 7 percent, writers 20 percent, and producers 23 percent. Smith found that only 10 percent of films had half female characters.

“Last time I checked, girls and women comprised half of the world, not a third or a quarter,” she said, adding that young girls rarely see women depicted in children’s films as scientists, engineers, executives or presidents. Therefore, they learn at a young age that those are boys’ jobs and such stereotypes pervade every category of filmmaking. “Research has shown that repeat exposure to sexualized or thin characters causes low self-esteem in girls,” concluded Smith. 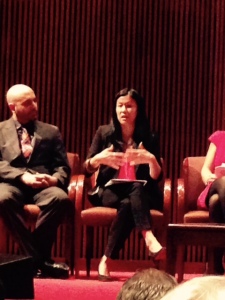 Angela Guy, senior vice president for diversity and inclusion at L’Oreal cosmetics, speaking at the conference on women and girls in the media. Photo by Lori Perkovich