To learn about South Africa’s transformation since the end of apartheid in 1994, a group of graduate students from New York University’s Center for Global Affairs visited Johannesburg and Cape Town in June. Lori Perkovich reports. 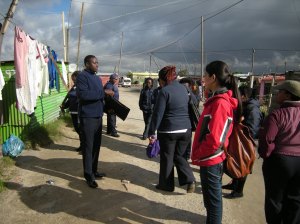 The sprawling township of Khayelitsha was a sharp contrast to most of the places we visited in Cape Town. While many of its 1.8 million people live in solid houses, increasing numbers live in shacks crammed among sand dunes that flood during heavy rains. These shanties have no running water, sanitation or electricity.

Our group split into two, with some students working at a local soup kitchen for the day and others accompanying home health aides on visits to Khayelitsha residents with chronic illnesses.

Nomakaya Blom led students through the squatter areas, where caregivers visited home-bound people and delivered medical aid. The caregivers, 89 people from the community who are trained to make home visits, are part of the Caring Network, which is affiliated with the Western Cape Provincial Council of Churches.

The group delivered antiretroviral drugs to HIV/AIDS patients as well as food and medication for a 5-year-old girl fed with a feeding tube. Another visit was to one woman who suffers from hypertension, diabetes and several other health issues. The caregivers explained that some of the illnesses could have been prevented or made more manageable if the individuals had been able to afford healthcare. For instance, the girl’s disabilities were brought on by an infection.

Most of the shacks in Khayelitsha are made out of corrugated metal, wood and plastic. They lack running water and rely on communal toilets and portable latrines that line the streets in several areas. Some households use a 10-gallon plastic container for human waste disposal instead. The government does not supply electricity, but some residents tap into the power lines, creating a haphazard set of electrical cords wired to individual homes, which can lead to fires.

The other group of students went with Rev. Mqondisi Vena, head of the provincial council of churches, to a local soup kitchen. Students had an opportunity to tour the grounds, including the church and the plot of land where community members grow vegetables used at the soup kitchen.

Students set the tables and prepared vegetables for a meal. The women who worked there already had a large kettle of soup ready for the midday meal, which the group served to the community. After serving and then washing up, there was an opportunity to sit with some of the locals and learn about daily life in Khayelitsha.

The visit to Khayelitsha was an important part of our research; it was a serious reminder of how much poverty still remains in South Africa but also the hope, kindness and resilience that exists in a disadvantaged community.

The slideshow is a small glimpse of life in the South African township.