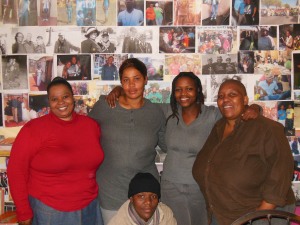 South Africa has extremely high rates of rape and other forms of gender-based violence. Hayley Chesnik reports on her travel to Johannesburg and Cape Town to learn about efforts to address the issue.

On a brisk Monday morning, I traveled to KwaThema Township, east of Johannesburg, with a small group from New York University’s Center for Global Affairs to meet members of the Ekurhuleni Pride Organising Committee (EPOC), a community group working to raise awareness of hate crimes against LGBTI individuals.

Before heading to meet the rest of the EPOC leadership, we first drove through the orange-colored streets of KwaThema. Talking casually with my two classmates in the back seat, we were all unsure of our initial destination that morning. Suddenly, we stopped in front of a seemingly ordinary house in the middle of the township. Then I heard Matseko Mahlaba somberly explain that a young, female gay rights champion, Eudy Simelane, had been brutally gang-raped and murdered there in 2008. My eyes widened. The van filled with silence.

The sobering atmosphere worsened as we continued through the township streets until we came across an open grassy field, not far from a playground. This field was the site of another vicious “corrective rape” and murder of a young woman, 24-year-old mother-of-two Noxolo Nogwaza, an EPOC activist and leader, in 2011. A Human Rights Watch report recalls that her face and head had been disfigured as a result of stoning and she had been stabbed multiple times.

The two victims were murdered for one specific reason: They were both public about being lesbians.

The sexual torture and brutal murders of these young women were just two attacks in a long line of sadistic hate crimes against lesbians, gay men, and transgender people in the area. Although the entire Ekurhuleni community was aware of their murders, fear kept anyone from speaking out. Upon leaving the chilling field, Matseko Mahlaba turned to us and said in a voice that was strong yet solemn, “You cannot correct me from being lesbian.”

Twenty years after the end of apartheid and the passage of one of the world’s most progressive constitutions, South Africa still experiences the highest levels of violence against women outside of war zones. Despite legal reform, the harsh reality of rising violence against women and extreme gender inequality still plagues the country. Even though laws are in place to criminalize and prosecute the perpetrators of sexual violence (i.e., the reformed South African Sexual Offences and Related Matters Amendment Act of 2007), they are too rarely enforced. The South African Medical Research Council reports that over 25 percent of South African men of all racial groups surveyed in both rural and urban areas of KwaZulu-Natal and Eastern Cape provinces admitted to having raped a woman. Yet, due to the stigma that falls on rape victims and their fear of coming forward, only one in 25 women who have been raped report it to the police, according to a joint study by GenderLinks and the MRC. What’s worse, less than 10 percent of the rape cases that are actually reported result in the conviction of the perpetrator. In fact, of the 66,196 cases of rape that were reported to the South African Police Services in 2013, only 4,500 resulted in convictions. Even Nogwaza’s killers are still at large. Three years later.

Ntsupe Mohapi, EPOC chairwoman, specifically highlighted the problem of poor evidence collection and improper documentation by the police as one factor contributing to the low conviction rate. The lack of gender-sensitive training for police officers has not only resulted in insufficient investigation into sexual offences (despite the large number of reported cases) but also increased secondary trauma for victims. Mohapi lamented the fact that many victims, especially butch lesbian women, are subject to secondary victimization in the police station, where officers mockingly ask them, “How do you get raped?”

Given the problems of poor evidence collection, police accountability, case backlog due to a shortage of magistrates, and untrained court personnel, organizations that provide legal support to victims can mean the difference between a conviction and an acquittal of a perpetrator of sexual offenses. The legal department at People Opposing Women Abuse (POWA) —a feminist organization advocating against rape and other forms of gender-based violence — prepares female victims of sexual violence to testify in court, specifically teaching them how to respond to questions when cross-examined. Tiny Moloko, a social worker and counselor at POWA firmly stated, “You cannot deal with domestic violence and not empower women with legal rights.” Sadly, many of these local organizations lack adequate funding to keep their much-needed front-line services for victims in place. Moloko told our group that many on the POWA legal department staff have recently left as a result of insufficient funds. 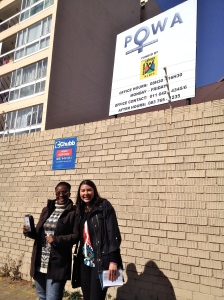 Many factors drive the severely high rate of sexual violence in South Africa. Firstly, the issue cannot be separated from the country’s history of apartheid, whose legacy of discrimination continues to drive a society marked by violence and residual anger. Great economic inequality, a high unemployment rate and a large wealth gap also intensify male frustration. Traditional ideas of manhood and power persist in this patriarchal society. Rape and other forms of violence against women have thus become common, turning sexual violence into an instrument of male domination over women. The majority of female victims are sexually assaulted or murdered by their intimate partners—people they know and perhaps even love. Moloko further mourned the fact that at POWA, they still find women who say, “It is okay for a man to beat me because he loves me.”

EPOC members assert that most of the hatred and discrimination against the LGBTI community stems from misinformation based on sexism and stereotypes. Mohapi said that community awareness is the most important part of the committee’s effort to fight the stigma against LGBTI people. Yet, EPOC understands that many LGBTI people do not even know themselves, which is why the group seeks to spread the message that victims of gender-based violence are not alone—they can find support and solidarity with other EPOC members through specially designed workshops and trauma counseling. Together they can begin the process of healing and self-liberation.

While gender-based violence does greatly affect women, it is not solely a “women’s issue.” Lucinda van den Heever, the international programs specialist at Sonke Gender Justice, believes that efforts to end GBV must move away from a women-centered approach in order to engage men and include them in the conversation. Since “most men make the decisions in the bedroom…, [it] only makes sense to target them,” van den Heever said. Believing men play an extremely important role in the achievement of gender equality, Sonke Gender Justice, therefore, works to strengthen state policies on GBV and support the positive involvement of men and boys to promote gender equality and prevent sexual and gender-based violence.

Unfortunately, many journalists and politicians do not approach violence (or everyday issues for that matter) from a gender perspective. Katherine Robinson, communications manager at GenderLinks, explains that “people don’t see [the] value of gender in the mainstream” since many businesses are mostly concerned with money and do not see gender issues as lucrative. Yet, “writing about gender is not something additional…,[People] need to see why gender is important,” she says. To amplify the efforts of GenderLinks and the issues of GBV on a global scale, Robinson works with media houses in order to train journalists on the coverage of gender issues and on broadening their audiences.

The brutal murders of the two members of Ekurhuleni Pride sent shock waves through their society, leading to the first ever pride march in KwaThema. Nogwaza’s death even became part of the ruling African National Congress’s 16 Days of Activism campaign. However, sexual and gender-based violence must be tackled every day of the year if South Africa is to bridge the gap between women’s constitutionally guaranteed rights and their experiences of sexual and gender-based violence.

For more information on these organizations, please visit their respective websites: