After decades of armed conflict and violent crime, Guatemalans are striving to build a justice system that works. Barbara Borst reports in the first of a series of articles.

Guatemala is one of the world’s most violent countries. Over the past half century, it has endured a 36-year civil war, a genocide and a huge, ongoing wave of organized crime and drug trafficking.

Throughout the slaughter, killers have almost always been assured of getting away with murder. Guatemala’s ambassador to the United Nations, Gert Rosenthal, said the conflict left his country with “a culture of impunity from the top down.”

That is beginning to change.

In May, a Guatemalan court convicted ex-dictator General Efrain Rios Montt of genocide and crimes against humanity for ordering the killing of 1,771 Maya villagers during his rule, 1982-1983. That made him the first former head of state tried in his own country for genocide.

Within days, Guatemala’s constitutional court annulled the conviction on procedural grounds. That ruling created uncertainty about the next legal steps, but a new trial is expected in 2015 for Rios Montt, who is 87.

Meanwhile, survivors of the massacre have taken the issue to the Inter-American Commission, part of the Organization of American States.

In 2011 and 2012, Guatemalan judges sentenced six former members of the special forces to 6,060 years apiece in prison – 30 years for each of the 201 civilians in the village of Dos Erres that the group killed in December 1982, plus 30 years more for crimes against humanity.

Meanwhile, forensic teams are digging up mass graves from the Guatemalan civil war, unearthing evidence of atrocities, and also training specialists in forensic science. Other experts are digitalizing a vast cache of National Police archives from that era that has already proved useful in some court cases.

Fredy Peccerelli, executive director of the Guatemala Foundation for Forensic Anthropology (FAFG), said that the scientific investigation of the conflict era crimes began in the early 1990s, even before the peace accords were signed in 1996.

“We showed that the level of atrocity here was more than was publicized,” he said, adding that there are more than 600 known massacre sites and that more than 80 percent of the victims were members of indigenous Maya communities.

Guatemala is not just looking into old crimes; it also is trying to take on today’s powerful criminal organizations, some of them linked to illegal military and militia activities during the war years. The public prosecutor’s office has cut the rate of impunity for crimes against life from 95 percent in 2009 to 72 percent in 2012. It successfully prosecuted a former head of police investigations for extrajudicial killings, and numerous police and prisons officials for criminal activities. Guatemala now has a special anti-impunity bureau and a witness protection program. (Read more here.)

But the work still to be done is enormous. Guatemala’s homicide rate reached a high of 46.3 killings per 100,000 people in 2009, according to the UN Office on Drugs and Crime (UNODC).

The rate was down to 38.5 in 2011, the latest year for UNODC statistics, yet even that was eight times the US homicide rate and 35 times the rate in France. The UN agency said that Central America and the Caribbean were “nearing a crisis point” on homicides.

This assault on crimes old and new, and on politically connected criminal organizations that had previously blocked prosecution, is not merely coincidence. It’s a product of long and often dangerous efforts by human rights activists and officials inside and outside Guatemala. Among other things, they helped build national and international support for something quite new – the International Commission against Impunity in Guatemala, known by its Spanish acronym, CICIG.

“Neither the police nor the jails nor the prosecutor’s office nor congress – nobody was responding the way they were supposed to,” Rosenthal said. That was a major reason why Guatemalan leaders and civic groups requested help from the United Nations and other countries to bolster the justice system.

The commission assembled prosecutors and legal experts from other countries to help fight impunity and organized crime in Guatemala. But the team is not like the International Criminal Court or one of the United Nations special courts for Rwanda, Sierra Leone or the former Yugoslavia. Instead of prosecuting Guatemala’s criminals itself, the commission supports Guatemalan institutions in their efforts to investigate and prosecute those crimes, and in their fight against corrupt police, prosecutors and judges who help criminals get away with their crimes.

“Things are really moving in the right direction,” Rosenthal said.” CICIG is always pushing. It’s a catalyst for change.”

Mary Speck, a senior analyst on Guatemala for the International Crisis Group, a nonprofit specializing in political analysis, wrote in email that CICIG has helped the public prosecutor’s office make headway against organized crime, drug cartels and corruption in recent years. That effort, she wrote, is not entirely separate from the search for justice for crimes during the long conflict; the country needs both.

“Strong, accountable institutions are necessary both to bring justice to the victims of past crimes and to stop cycles of violence and impunity today,” Speck added.

Rosenthal said that CICIG was designed to focus on organized crime today, rather than on crimes from the armed conflict. In some ways, those seem to be two separate projects, he added, “except that on one level, they are all related.”

This is the first of four articles on Guatemala’s quest for justice for crimes old and new. Upcoming articles: Calling on the International Community, Digging up the Past and Fighting for a Future.

Lake Atitlan, surrounded by volcanoes, is one of the most beautiful sights in Guatemala. Photos by Barbara Borst 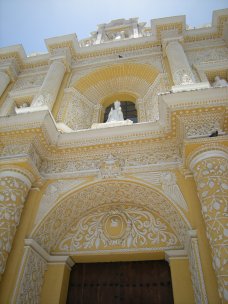 The decoration of La Merced church in the city of Antigua includes corncobs, a Maya symbol. 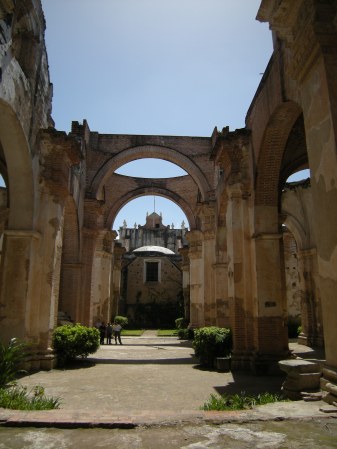 The Catholic cathedral in Antigua was destroyed in an earthquake in 1773.

Toppled pillars lie inside the ruins of the cathedral in Antigua.

Antigua’s Parque Central is the centerpiece of the old colonial city.