A new study assesses how Kenya avoided another round of widespread ethnic violence in the March 2013 elections and what steps it still needs to take. Barbara Borst reports.

A teacher in western Kenya speaks to two boys whose families were displaced during political violence. Photo by Barbara Borst (2008) 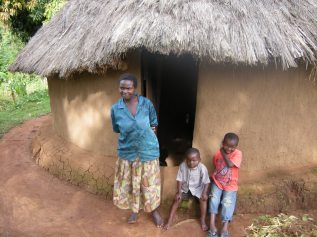 A family that had to flee political violence in central Kenya. Photo by Barbara Borst (2008)

Violence exploded across Kenya after the disputed presidential elections of December 2007, shocking Kenyans and the world. More than 1,100 people were killed, more than 600,000 were driven from their homes, and four are indicted by the International Criminal Court on charges of instigating the slaughter.

Many Kenyan and international groups have worked hard since then to change a pattern of politicized ethnicity and orchestrated violence that has traumatized the nation sporadically since its transition to multiparty politics in 1991.

In a new report for the Global Centre for the Responsibility to Protect,   Abdullahi Boru Halakhe, an expert on security and political analysis of the region, and a former journalist reporting from his native Kenya for the BBC, examines how well those efforts have worked.

Between 2008 and 2013, Kenya made institutional reforms that provided “a bulwark against violence,” Halakhe said during a recent panel discussion on the report, which highlights the effort to curb hate speech, an overhaul of the constitution and greater independence of the judiciary. He credited civic groups, donor governments, the United Nations and the African Union with crucial support for changes in Kenya.

Institutional weakness was a key factor in the violence of 2007-2008, he said. Changes since then include not only laws prohibiting ethnic or religious discrimination and incitement but also “actual enforcement of the prohibition,” he wrote.

The new constitution, approved by referendum in 2010, created a Supreme Court, set new procedures for appointing judges and emphasized the Bill of Rights, he wrote. He measured the impacts in two ways: a 2012 poll showing that 84 percent of Kenyans had confidence in the courts, compared with only 27 percent in a 2009 poll, and the willingness of the 2013 losing presidential candidate, Raila Odinga, to take his charges of electoral fraud to the Supreme Court, rather than the streets.

However, Halakhe’s research found little progress on police reform or on investigating and trying perpetrators of political violence. The government’s Commission of Inquiry into Post-Election Violence found that police were responsible for more than 35 percent of the deaths in 2007-2008 (p. 346).

“The security situation is fairly tenuous,” he said. “Post-2007 police reform has not gone far enough.” He added that the government focuses instead on objecting to the International Criminal Court and on “securitizing every problem we have in Kenya,” especially after the September terrorist attack that killed more than 70 people in Nairobi’s Westgate shopping mall.

Halakhe wrote that, inside Kenya, there has been “little attempt to prosecute those who allegedly bear the greatest responsibility for mass atrocity crimes” after the 2007 election. The Commission of Inquiry into Post-Election Violence requested a special tribunal in Kenya, but parliament did not create one. The commission gave a list of major suspects to former UN Secretary General Kofi Annan, who passed those names to the ICC in July 2009, more than a year after the violence.

In December 2010, the court indicted Uhuru Kenyatta and William Ruto, political leaders on opposing sides in 2007-2008. Halakhe said the ICC indirectly helped prevent violence in the 2013 elections because the indictments prompted these two to campaign together, which greatly reduced the chance of bloodshed. Kenyatta was elected president and Ruto, deputy president.

“Kenyatta and Ruto built their campaign around the ICC,” arguing that the indictments were designed to keep them from seeking office, Halakhe said. “The ICC is a very hot topic in Kenya.” Kenyatta pushed for trial delays and called on African leaders to withdraw support for the court. His trial is set to start on Feb. 5; Ruto’s began in September.

The panelists discussing Halakhe’s findings included Jacqueline M. Klopp and Castro Wesamba, a political affairs officer in the United Nations Office of the Special Adviser on the Prevention of Genocide.  Klopp is a research scholar at Columbia University’s Center for Sustainable Urban Development and a founder of the Internal Displacement Policy and Advocacy Center in Nakuru, Kenya.

Klopp said that Kenya has worked hard to overcome the problematic institutions it inherited at independence from Britain in 1963, but still has more work to do. In particular, its cycles of political violence, especially since 1991, have left deep scars. Because people cannot count on government protection, they turn to their kin for security, intensifying ethnic divides.

“I think very serious violence is still possible,” she said. While Kenyatta and Ruto work together for now, she believes their supporters have not reconciled and that the two leaders continue to manipulate the public.

Klopp worries about the possible reaction in Kenya if the ICC rules against one set of defendants but not against their erstwhile rivals.

Halakhe shares that worry. He said ethnic identity is “at the center of Kenyan political discourse” not because Kenyans are “hardwired in identity” but because politicians who have no policy innovations to propose use ethnicity as an easy way to stir up support.

Wesamba, who is Kenyan, said his country’s politicians use ethnic identity to gain and maintain power.

“It’s not identity that creates a problem; it’s the manipulation of identity for certain purposes,” he said. “In Kenya, that has been sustained for 50 years.”

Wesamba praised the work of human rights activists and other civic groups in challenging the political elite, and of the international community in emphasizing rule of law in Kenya. He said human rights advocates played an important role during the 2008 violence and that he hoped the Kenya National Commission for Human Rights would rise to that standard, despite political reluctance to appoint commission members.

The fact that leading individuals are facing prosecution at the ICC for serious crimes has “completely changed the dynamic in Kenya” for the better, he said.